X Factor star Jahmene Douglas went back to his old employer Asda on the North Orbital Centre and carried off a cheque for 10K for Woman’s Aid – his charity. 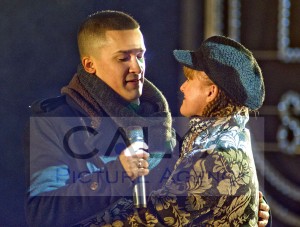 He was being filmed for the show’s final which takes place in Manchester over the weekend.

He then made an X factor entrance to turn on the Town Centre lights with Swindon’s sport stars and performers. His show was watches by an estimated 28,000 people who packed into the twon centreto see him rounding off the evening with three songs from the show, dedicating them to his Mother Mandy.