Do you remember when the local Policeman went on the beat with a bicycle? 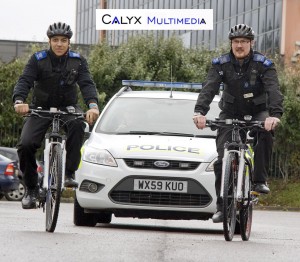 Well, with West Swindon full of pedestrian and cycle routes inaccessible to cars, beat policemen and community support officers are now able to get out and about around their beat and still achieve a rapid response to incidents by bike thanks to funding from Swindon Travel Choices,

PC Tom Turner of the West Swindon Neighbourhood Police Team said the team were grateful to Swindon Travel Choices for making the £3,000 grant to purchase the bikes with a three year servicing contract. “They’re superb bikes which gives officers a great deal more flexibility to get around the backways and shortcuts that you find all over West Swindon.”

NPT Sergeant Pete Foster said his experience of using bikes in Pinehurst where he used to work showed their effectiveness. “A common and understandable gripe of the public is that they don’t see the police on the ground. Bikes provide increased visibility in places that perhaps are not patrolled so often, and those up to no good now know there are no hiding places.”

PCSO Joseph Rees said there had been a positive reaction from the public. “We’ve had the bikes since early November and people really like to see us out and about. If you’re riding on a footpath you usually have to stop pedestrians and dog walkers pass by so its a good opportunity to chat about what’s going on in that neighbourhood. We’re picking up bits of intelligence which could help with investigations.

“By taking all the shortcuts the bikes allows us to get from A to B very quickly; depending where we are when there is an alert, we can often get to a scene quicker than a response car.”

Colleague PCSO Richard Lane added: “It’s a bit like the old days when a local policeman patrolled an area. We’ve been doing this on foot and in a car for several years, but a bike allows us to be seen on the ground by more people compared with walking patrols. The kids are well impressed when they see us ride up for a chat.”

Justin Woodward of the Big Adventure Store said he was delighted to quote to supply the bikes. “The Merida bikes have the new larger 29” wheels which have the right combination of strength for tackling off road conditions whilst having the ability to get up to a higher speed quickly. As both a West Swindon resident and a business, I’m keen to help the Neighbourhood Police Team. It’s in all our interest that we help them keep mobile to keep us safe. We’ll be giving the bikes a service every month so that the police staff know they maintain good visibility in the community.

Swindon Travel Choices is a government funded project to support the regeneration of Swindon Town Centre by promoting different travel choices to the people who work in the town centre and live in the borough.