Two army squadrons marched through the centre of Swindon to mark the 70th anniversary of a landmark battle and the signing of an Armed Forces Community Covenant. 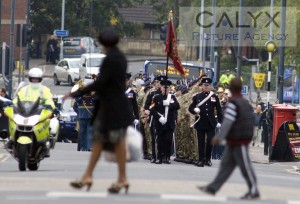 The squadrons were welcomed by the Mayor of Swindon Cllr Mick Bray and were joined by the Band of the Royal Yeomanry, the Isambard School Detachment of the Army Cadet Force and Members of the Royal Wiltshire Yeomanry Association.

The Parade left Church Place at 12.35pm and made its way through the town centre via Commercial Road before finishing at the Civic Offices in Euclid Street at 1pm.

The second battle of El Alamein is viewed as one of the most important victories of the Second World War and was fought in the deserts of North Africa. It is considered to be the primary battle honours of the Royal Wiltshire Yeomanry and the Allied victory led to the retreat of the Afrika Korps and the German surrender in North Africa in May 1943.

The covenant aims to encourage all parties within a community to offer support to the local Armed Forces community and make it easier for Service personnel, families and veterans to access the help and support available from the MOD, from statutory providers and from the charitable and voluntary sector. 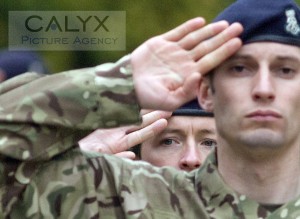 The scheme is intended to be a two-way arrangement and the Armed Forces community are encouraged to do as much as they can to support their community and promote activity which integrates the Service community into civilian life.

The covenant will be signed by representatives of the Armed Forces, the Mayor of Swindon Cllr Mick Bray, Council Leader Cllr Rod Bluh, Labour Group Leader Cllr Jim Grant and Liberal Democrat Leader Cllr Stan Pajak. Representatives from a number of charities and voluntary groups will also sign the agreement.

Cllr Bray said: “It is 10 years since the Royal Yeomanry were granted the Freedom of the Borough of Swindon. The Yeomanry, a Territorial Squadron have provided many of their number to serve in Afghanistan, taking them away from their families and day to day employment over many months.