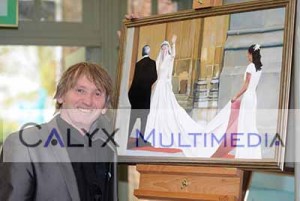 Pippa’s derriere takes pride of place at Cancer Charity Wedding Fayre.
Pictured: Michael York with his Royal wedding scene.
One of the world’s most photographed women has been imortalised on canvas. (Pippa Middleton’s rear was one of the star attractions of the Royal Wedding.) The painting took pride of place at a Wedding Fayre in Royal Wootton Basseton Sunday. Local Artist Michael York painted the scene as Kate waved to the crowd, as she and her father entered Westminster Abbey a year ago.
The scene was one of the most talked about on the social networks, as the world fell for bridesmaid Pippa and her derriere.