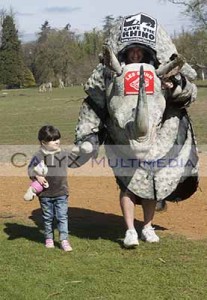 Saving the Rhino.
Walking with the Rhino, Sophia Eddyshaw walking with Les Slinn in the Rhino costume that he will run the London Marathon in at the Cotswold Wildlife Park in Burford.
Les, a Personal trainer from Swindon hopes to better the 4hr. mark and raise thousands for the Save the Rhino charity in the process.