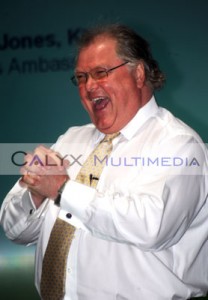 Lord Digby Jones during his talk to launch Plan 500 at Swindon’s Nationwide HQ.
Plan 500 launches second year – creating work opportunities for young people in SwindonPlan 500 will be launching its second year in Swindon this Friday at a special event.Guest speaker, Lord Digby Jones Kt, UK Business Ambassador will join other speakers to highlight the importance of this successful business-led initiative, in offering young people work experience in Swindon. Last year Plan 500 beat its own target to offer 500 job opportunities, reaching 557 at its close in September 2011.The event will be hosted by Nationwide Building Society, at Nationwide House, Pipers Way, Swindon, SN3 1TA, Friday 20th January 2.30pm-4.30pm, and is designed to brief business owners and managers on the benefits of offering apprenticeships and other opportunities to young people, and explain how easy it is to get involved with Plan 500 this year. Other speakers at the event will be Anne Carrigan, Nationwideâs Head of Resourcing who chairs the Plan 500 board; Ian Piper CEO at Forward Swindon, delivery partner for Plan 500; Dr John Chudley from the National Apprenticeship Service; and Rob Angus, Head of Strategy and Planning at Nationwide Building Society.The purpose of Plan 500 is to increase the number of job opportunities for young people by providing a single point of entry for employers wishing to offer work, training or support to young people aged 16-24. A new set of targets have been established for 2012, with more emphasis on tracking the effectiveness of each. In 2012 Plan 500 will aim to deliver: 150 new Apprenticeships 150 new Work Experience opportunities 25 additional Business Mentors trained 100 Employers receiving Work Based Qualifications information linked to RPA* 75 young people not in employment, education or training, being assigned a mentorThe next phase of Plan 500 comes at a time when the Government have increased to 18 the age at which young people can leave education or training. *This initiative is called raising the participation age, or RPA. This is the first time in 40 years that the âleaving ageâ has been raised, and means that young people must stay at school, college or a job with training of some kind until they reach 18 years. A key new role for Plan 500 this year will be to help employers understand these new rules and the implications for the young people they either employ already or wish to take on. Ian Piper, from Forward Swindon says:âForward Swindon’s role is to identify and tackle the barriers to creating economic opportunity for the businesses and people of Swindon. Plan 500 is a great example of helping both. It aims to create a greatly simplified approach for businesses to help young people, accessing the various strands of support provided by the public sector without the bureaucracy. As a result, more opportunities are created than otherwise would be, for young people to gain real experience and training that helps them enter the work place on a long term basis.âAnne Carrigan, Chair of Plan 500 says:âPlan 500 is a response to supporting young people aged 16-24 to realise their potential and the skills needed to drive Swindon forward. In Aug 2009, the Swindon Strategic Economic Partnership discovered that the number of 18â24 year olds who had been claiming Jobseekers Allowance was growing faster here in Swindon than pretty much anywhere else, so they knew something had to be done. Plan 500 was created to bring about opportunities, and aims to be the employer gateway to engaging with young people. It looks to create opportunities that will help young people build confidence, build on their experience of the workplace – so that when they find themselves in a job interview they are much more likely to be hired.âENDS