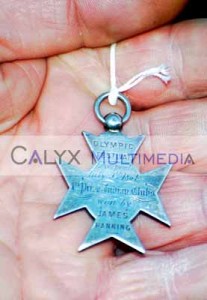 Scott Couleston fron Town Auctions holds the 1864 Olympic Festival medal before the auction.
AN OLYMPIC FESTIVAL MEDAL PRESENTED TO A JAMES HANNING WENT UP FOR AUCTION AT TOWN AUCTIONS SWINDON.
Extract from http://www.johnhulley-olympics.co.uk/

On 9th July 1864 the 3rd Olympic Festival organised by the Liverpool Athletic Club with John Hulley now the Vice-President of the Athletic Society as its Honorary Secretary was held at the Zoological Gardens. It was due to be held on 2nd July but was postponed due to unfavourable weather.