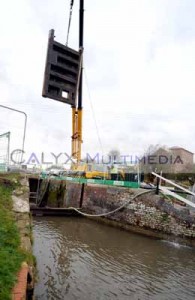 A new lock gate is lifted into place at Crofton on the Kennett and Avon Canal.
The 3 ton gate was one of 4 that is being renewed in the Crofton area.

British Waterways have begun their winter works on the Kennet & Avon Canal at Crofton between Devizes and Newbury. The on-site team are craning out the huge oak gates, each weighing more than two tonnes, at Locks 55, 58, 59 and 60.While the locks are drained for the removal, repairs will be carried out on the locksâ brickwork and mechanisms. The new gates that have been hand crafted in British Waterwaysâ workshop will then be installed.The eight week project will be completed before Christmas and will cost Â£350,000.These sets of gates are four of the 16 that will be replaced on the 200-year-old Kennet & Avon Canal this winter – part of British Waterways Â£50 million national winter works programme.The winter works going on in the coming months are particularly significant because they are the last that will be carried out by British Waterways. Next year the 2,200-mile network of canals and rivers cared for by the public corporation will be put into a trust for the nation. A new charity: the Canal and River Trust will be created to protect these valuable heritage assets and a new era on our 200 year old network of inland navigations will begin.Mark Stephens, Waterway Manager for the Kennet & Avon Canal, said: âBritainâs canals and rivers are set to become a new waterways charity next year so this yearâs maintenance programme marks a turning point for the nationâs historic waterway network.ââWe look after the third largest estate of listed structures in the country, including many iconic examples of the nationâs industrial heritage. I hope that by opening up the repair works this winter, we can give people a chance to see the scale of the work we do to ensure that the waterways are preserved for todayâs users and future generations.â