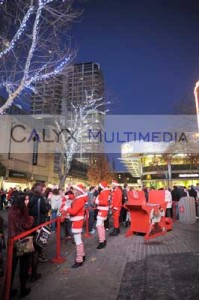 80 years after Coca Cola adopted Santa as a marketing gimick ( and become associated with turning Santa red and white ) the public still flock to have their photo taken with a big lorry and a painted Santa.

Coca Cola elves keep the queue in cans of the drink as they wait to be photographed with the Coca Cola lorry in Wharf Green Swindon.